Settling in and getting to know Aberdeen 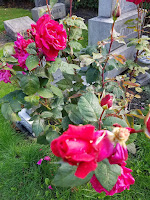 It seems difficult to believe that two weeks have passed already. Classes have started, assignments are due, the weather is getting just a little chillier (but still quite pleasant). The leaves are just beginning to change, but the roses are still blooming!

I've explored more of Aberdeen, and feel better about how to get from one place to another without resorting to the tiny, well-worn paper map in my pocket, or (last resort) using mobile data to get there with Google Maps! The downtown area of Aberdeen has city-wide wifi, which is great. This is a perfectly walkable city--15 minutes from my flat to downtown, or to school. 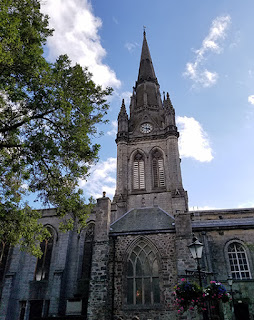 Last Saturday was Doors Open day in Aberdeen, when the public is invited to tour many of the public buildings that are normally off limits. I thought I'd see a half-dozen or so of the many interesting places listed. I made it to exactly one, and had a wonderful time doing it. The Kirk of St. Nicholas (the "Mither Kirk" of Aberdeen) was where I spent several delightful hours.

I arrived at the church door just in time--a carillon concert was starting in a moment. I ran up the steps of the bell tower, and slightly winded but more amazed, watched the quietly energetic carillonneur, Ronald Leith, as he played a variety of pieces, including some well-known Scottish airs. He's done this for 40 years, and it's a joy to watch him, and even more, to listen.

I thought that was all, but no...people were climbing yet another set of stairs to somewhere else--the bell tower above. So I followed the bells...the bells... 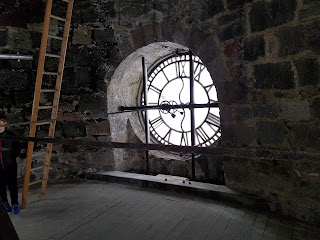 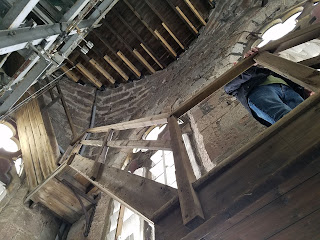 I climbed still higher, keeping a good handhold on the stone wall and whatever else was at hand. The stairs became steeper and more narrow.  Definitely one-way traffic here--people coming down had the right of way. I wasn't quite sure where these stairs were going, but I soon realized that I was behind the face of the clocks at the top of the bell tower. (You can continue on up a ladder--I elected not to--but it's windowless and dark up there, according to a few who braved it.) The clock room was beautiful, though.

The hard part was coming back down through the trap door in the floor, placing each foot carefully on each narrow wooden stair as I descended. But I made it without any trouble, and went on to see other wonders in the church.

A significant portion of the church is being excavated, as a thousand years of history revealed themselves below the floors of the East Kirk during renovations. We were allowed to walk through the excavations, which were pretty amazing. As I picked my way down the catwalks into the site, I felt like I was traveling back in time 400, 500, 1000 years, to 1700, 1500, 1100, and perhaps earlier. The archaeological team continues to uncover ancient walls and artifacts.

Here are a few pictures of the excavation site, showing the old walls that were uncovered as the team dug out 12-15 feet of soil. Hundreds of burials were carefully removed and preserved for future re-interment in the church when everything is analyzed.

Overall view of the archaeological site: 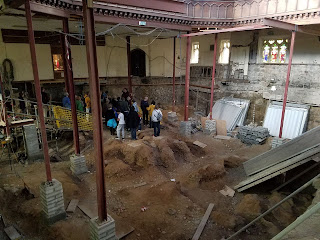 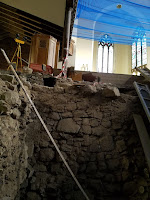 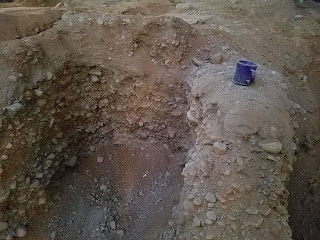 Right: View looking into St. Mary's Chapel, from the excavation site below

Left: Don't drink that coffee. (It's incredibly dusty at the site!) 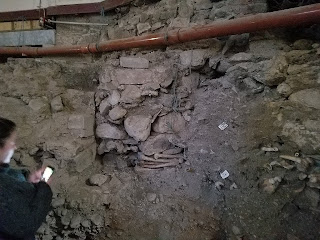 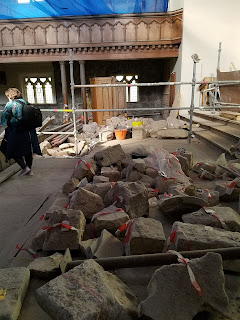 Right: Everything is carefully tagged and catalogued. 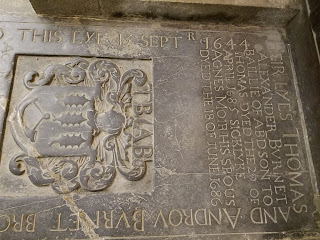 There's much more, but that's probably plenty for the purpose of this blog. Email me if you have more questions or want to see more pictures.

St. Mary's Chapel is also being renovated, with some lovely stained-glass windows, as well as some ancient creatures at the base of each arch in the ceilings. 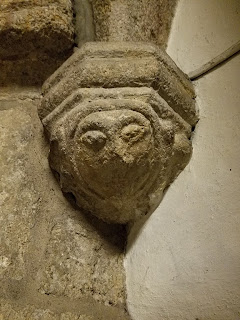 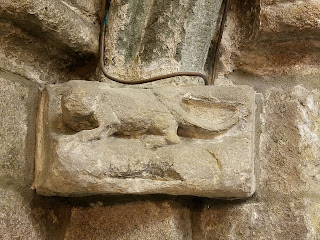 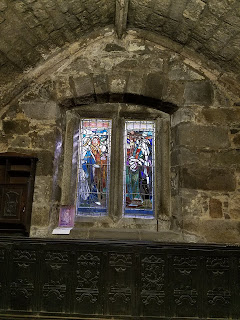 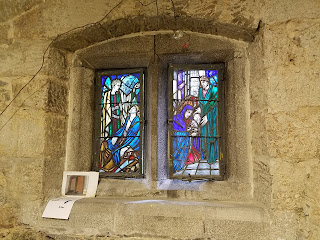 On my way home, I glimpsed an interesting person waiting to cross the street, perhaps a visitor from past centuries? 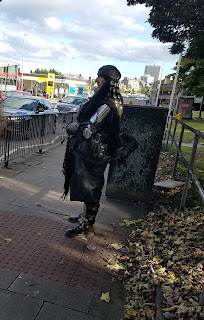 More later...I believe I've been "blatherin' awa'," as they say around here. Enough for now.

Next episode: a typical walk from my flat to the campus; a short walk to the North Sea coast; a few pictures from in and around Aberdeen.

Our class is on a Field School expedition next week, so I will have lots of tales to tell after we get back from that trip!

P.S. Let me know if you have trouble with the short videos, or if they work correctly? (I'm new to this.)
Posted by Mara Shea at 1:55 PM 13 comments:

I have landed! All went smoothly (even with a missed connection from Heathrow to Aberdeen), and my luggage appeared on the carousel in Aberdeen. Miraculous!

I spent most of the first 24 hours getting things settled in my dorm room, which is quite nice--late IKEA, by the looks of it. Clean, minimalist, easy 15-minute walk to the University, and on a bus line. The grocery store is only a 15-minute walk away, too.

The jet lag has evaporated, and today was the first real day of class. We have an ambitious term ahead of us! Much to learn, but it also includes a good bit of field school. Classes meet on each Tuesday and Thursday, from 10 a.m. to 6 p.m.  We'll spend the third week of September traveling in a mini-bus from one side of northern Scotland to the other, exploring historical sites and being introduced to the whole idea of interviewing people, recording what we see and hear, and learning to document and archive. I see lots of reading and writing in my near future!

Next week I will be a member of the Scottish Culture and Traditions staff, playing in a concert with all the tutors for SC&T. The American Traditional Fiddle Tunes class I'm assigned to lead begins on September 25, after I return from the field school.

Today our class went on a guided walking tour of Old Aberdeen--it was a perfect day for it, as it wasn't cold, and it wasn't raining!

Interesting note: if you need to mail a letter, take a look at the bright red letter box and see what is on the front of it. If it's "VR," that indicates that it was made during Queen Victoria's reign (Victoria Regina). 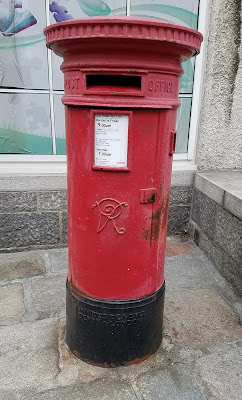 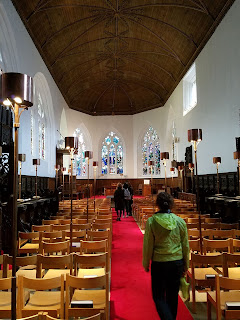 Inside the chapel is the tomb of Bishop Elphinstone, the founder of the University in 1495. Beautifully carved choir benches line the walls. 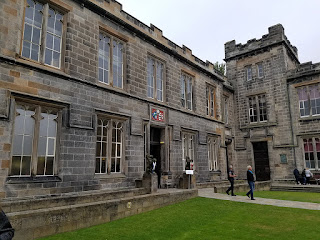 Outside in the cloister, colorful coats of arms contrast with granite walls. 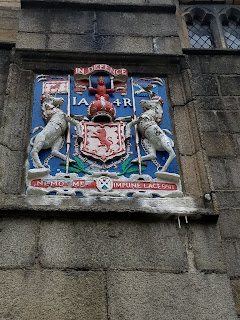 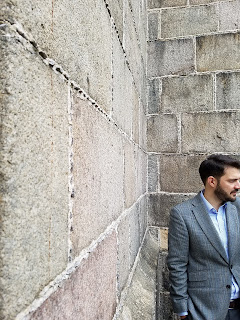 Many of Aberdeen's old buildings are constructed of granite--no surprise that it is known as The Granite City. The mortar lines between the blocks of granite are often decorated with small, sparkly pieces of granite, or sometimes with bits of shells. 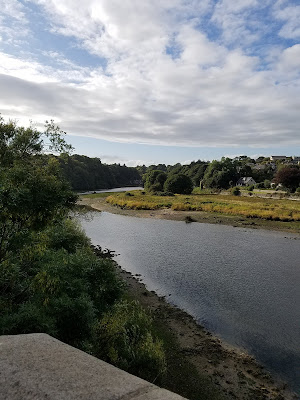 The River Don is on the north side of Aberdeen, flowing into the North Sea. At low tide, seals like to soak up the warm sun on the sand bars, and frequently appear briefly on the river surface. You might see a sleek head bob up above the water for a moment, ducking out of sight and reappearing farther away in a moment or two. We spotted two adults and a youngster today, sunbathing on the sand.

A short and scenic walk away from the North Sea back towards Old Aberdeen leads you to the Brig o' Balgownie. The sign on the beautiful medieval stone bridge states that it is one of the oldest in Britain, and was completed about 1320, perhaps at the orders of Robert the Bruce. It has a graceful Gothic arch, visible if you walk along the river on the south side. 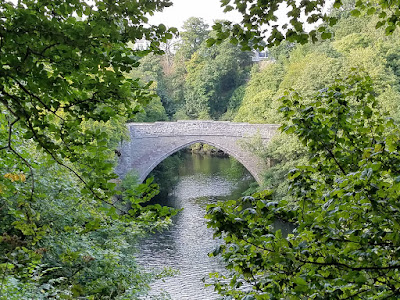 It seems to be a spot where graduating students are tempted to celebrate by jumping into the River Don from the bridge! As a signpost on the bridge advises, this is a terribly bad idea, as the water is shallow! 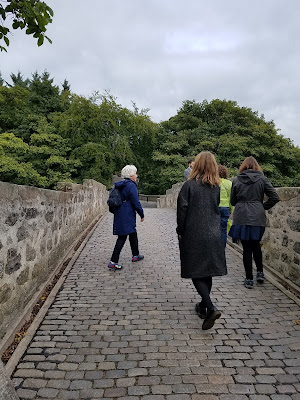 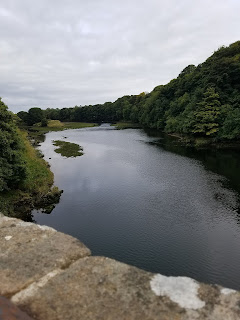 Our class of seven students chose the safer option of simply leaning over the bridge to gaze at the dark water below. 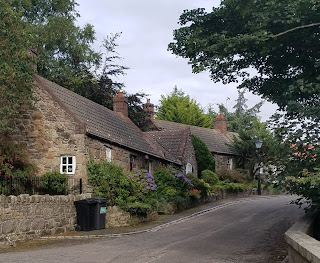 There is a charming little village on either side of the River Don, with picture-postcard houses dating to sometime in the early 17th century (perhaps earlier, but I'm taking that information from a plaque or two that I saw on them).


The Cathedral Church of St. Machar--another ancient place well worth more exploration (note to self)--is named for St. Machar, a disciple of St. Columba (of Iona), who is said to have asked St. Machar to locate a specific place on the  River Don and establish a church there, which he did in about 580 AD.  The existing church, built in the early 12th century, and rebuilt in the 13th century, has survived many attempts to destroy it.


The interior of the church is awe-inspiring and lofty. Tall, slender stained glass windows invite you to take a few moments to gaze at the ceiling, a work of art all by itself. It has 48 heraldic shields arranged in three columns--representing the monarchs of Europe, the Pope and Scottish clerics, and the King with his nobles all seeming to march towards the figure of Christ.

A Pictish stone decorated with a carved cross is displayed at the opposite end of the church from the altar. The crowded, ancient graveyard outside is full of hundreds of old tombs and gravestones. I need to come back another day to walk through the churchyard and see what history lies there. 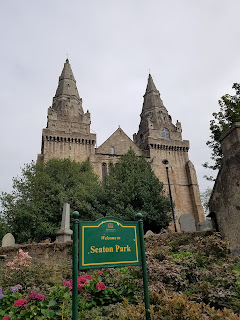 The path from the church leads through Seaton Park, lined with ancient trees. It follows the River Don as it wends its way to the North Sea.

We weren't short on snacks during our walk--there are blackberry and raspberry bushes in great abundance wherever there is a bit of sun. We took advantage of that! 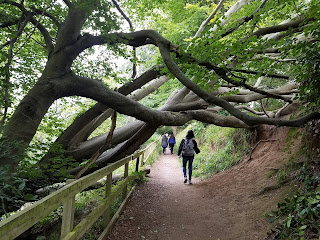 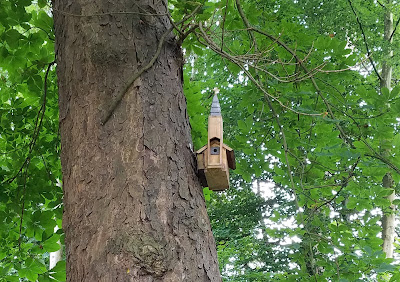 Near the church, I spotted a tiny birdhouse that seems to want to be a miniature of St. Machar's.

And back on campus, I found a couple of gems, not directly related to architecture or history, but perhaps worth sharing. Nowadays there is no fine of 2 shillings sixpence for walking on the grass or for riding a bicycle, but you might need to be wary of the Great Sabre-Toothed Haggis: 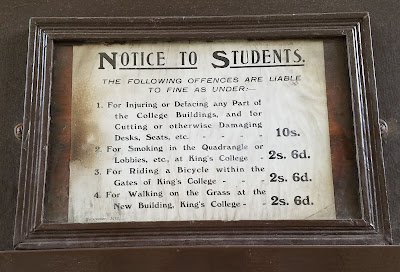 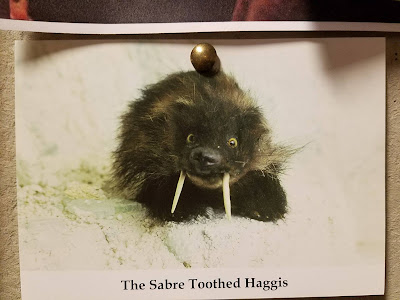 Incidentally, there are some really interesting and well-carved bits of ancient graffiti on those lovely old benches in King's College Chapel. I wonder if the lads were fined 10 shillings...