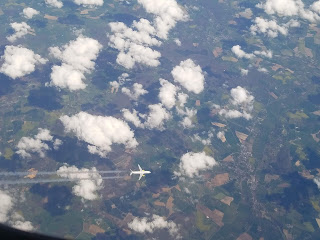 April and May in Aberdeen – time is speeding past! Final exams happened for me this past week, and I am very grateful to have that hurdle behind me. Now, of course, more work is ahead as I begin doing research and writing for the dissertation, the final part of the degree requirements. More on that at another time!

Since my last blog update (which seems like months ago, but was really only weeks ago),  winter, spring, and summer have all been battling it out here. But I am frequently told by Aberdonians that May does not mean spring is here...and they're right! 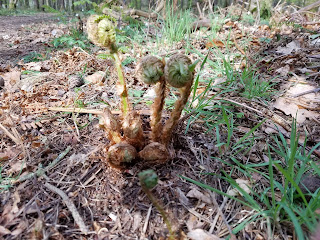 Here in Aberdeen, slightly warmed (?) by the North Sea, spring seemed to be winning for a while, but when I took a bus out one day in mid-April to Crathie, west of Aberdeen and at the foot of the Cairngorm Mountains, I realised that was an illusion. Standing at the top of a road in Cairngorms National Park, near Bush Lawsie, I let my camera survey the lovely snowy mountains surrounding me. Lochnagar could have been in the Rockies... 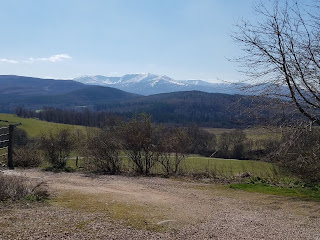 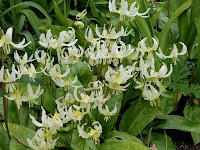 Meanwhile, a little more eastward in Aberdeenshire, spring had already made an entrance.


Just about 25 miles east of the Cairngorms, Crathes Castle gardens are famous, even off-season, for their beauty. In April, groves of fritillaria and newly unfurling fiddlehead ferns appeared around every bend in the paths. 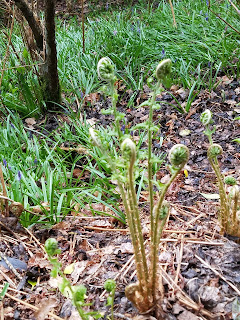 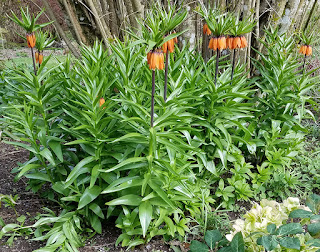 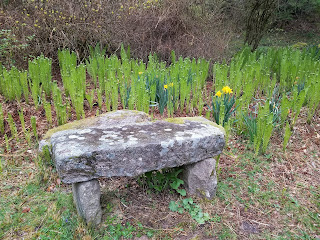 This stone bench in one of the gardens looks like something out of a miniature Stonehenge, almost dwarfed by daffodils, bluebells, and thousands of new fiddlehead ferns.

And one of my favorite trees in the forest at Crathes Castle looks curiously beautiful no matter what the season...leaves are just beginning to appear.


Shortly before Easter, a few snow flurries reminded us winter was still hovering in the wings; then Easter Sunday brought delightfully summery temperatures. That next week, clouds of color surrounded me on my way to the University each morning, with cherry trees, tulips, daffodils, azaleas, rhododendrons, early roses, and various shades of lilacs all blooming simultaneously.

Even the cooler days that returned after our brief outburst of summer didn't slow the riotous blooming. Seeing students walking on King Street in t-shirts and shorts, you could believe that winter had left the stage for the year. 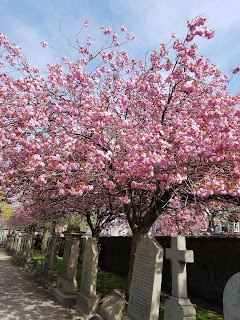 So on May 3, it was a little confusing to be exploring near a rural community called Logie-Coldstone, north of the River Dee and west of Aberdeen in bright sunshine, and watching the sunny green fields around me suddenly fogged over with blowing sleet and snow! (It had been a little chilly...) 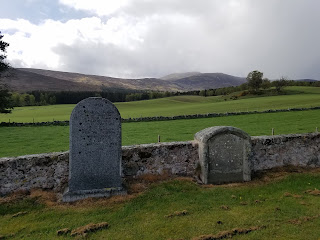 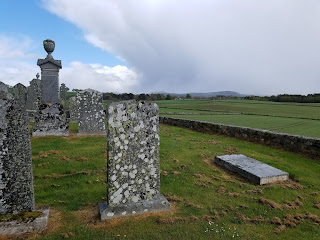 The dramatic shifts in weather didn't deter us from our mission to explore this 1846 graveyard (in Logie-Mar), but I was glad to have my heavy raincoat and woolen scarf. By the time we headed back to Aberdeen an hour later, it was sunny again, but we passed through three more bands of snow on the way home. This is apparently perfectly normal for Aberdeenshire. Who wants boring weather?

These days of exploration that I am enjoying right now have been a marvelous contrast to the intensity of getting ready to sit for exams, an experience I have not had to cope with for--umm--several decades. My level of general wisdom might have improved since I was last in grad school, but my ability to remember names has not. The past months have been creative ones, as I concocted ridiculous ditties to help myself remember who wrote what, when, and why. We'll see what the exam results might be in a few weeks. In the meantime, it's a relief to be outside in the wind and weather, letting some of that intensity wash away.

What else did April bring besides exams and weird and wonderful weather? We MLitt students, under the supervision of Dr Frances Wilkins, helped organise and coordinate an international conference weekend for the British Forum on Ethnomusicology (BFE), which was held at the Elphinstone Institute. That involved everything from keeping an endless supply of coffee, tea, and biscuits coming for the 100-something delegates; posing as IT experts and helping to get delegates' presentations loaded on lecture hall PCs; serving at the wine reception; playing music at the wine reception; being part of the ceilidh band for the celebratory dinner at a local community hall; providing child care; calling cabs; and being kitchen staff! We did get a chance to sit in on some of the papers being presented, which was interesting. It was a good experience, and we also went on an afternoon trip to see Dunnottar Castle and Crathes Castle with the delegates. And yes, we did finally get those big tables around a corner and through the narrow doorway of the Buchan Library, although it was iffy for a moment or two... 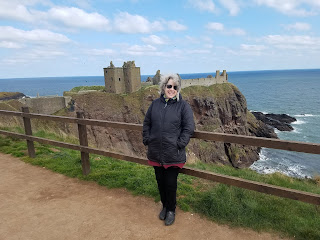 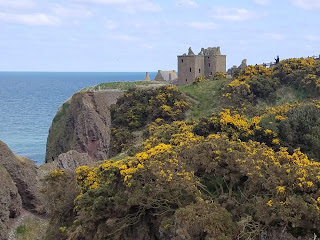 Dunnottar Castle is well worth several hours' visit if you have the chance to visit this area of Scotland. The medieval castle ruins are amazing, as they are well preserved and hold a lot of stories and history, and the seacoast landscape where the castle is situated is perfectly stunning. The clifftop has been the site of a 5th-century AD Pictish fort, a medieval church, a 14th-century fortress, the home of the crown jewels of Scotland (the Honours of Scotland), a 16th-century mansion, and in the 17th century, a much-expanded fortress. It remained active until the 18th century, when it was surrendered in the Jacobite uprisings and abandoned. Today it is owned by the Cowdray family, who purchased it in 1925 and preserved it. Here are a couple of websites where you can find more history of the castle: https://www.undiscoveredscotland.co.uk/stonehaven/dunnottarcastle/index.html and https://www.dunnottarcastle.co.uk/history/

Trails wind all around the promontory, and it is a splendid time of year to see the gorse in bloom. There's a saying here that 'when gorse is out of bloom, kissing is out of season'. (There's a similar one that swaps out kissing for whisky.) Since I have been here, I have never seen gorse NOT blooming somewhere, so no worries. But at the moment it's really beautiful--big hilly mounds of brilliant golden flowers everywhere you look! (Probably not so good to pick them, though.) 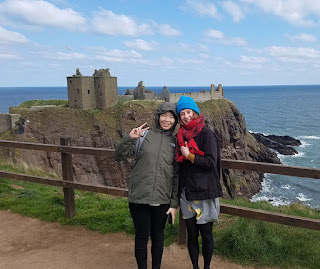 At right is a picture of two of my classmates, Wen-qiu and Eleanor, posing in front of Dunnotar on our outing with the delegates. You may have seen them in previous posts here playing musical instruments. Wen-qiu plays the pipa, a kind of Chinese lute, and Eleanor plays the piano, banjo, and fiddle.

Like Dunnotar, Crathes Castle also has an interesting history. It has been in the Burnett family since it was built in the 16th century by Alexander Burnett (it took 40 years to build). Robert the Bruce granted the Burnetts a large amount of land in 1323. However, the Burnetts lived for several centuries in more down-to-earth dwellings they built on a nearby crannog (an island, often man-made, in the middle of a lake) before Alexander Burnett built the castle that still stands today. The National Trust has owned it since 1952, but the Burnett family still use the castle; it's not unheard-of to see one of them stopping into the tea shop near the castle.

For more photos and history, try these websites:
https://www.nts.org.uk/visit/places/crathes-castle
https://www.britainexpress.com/attractions.htm?attraction=1202 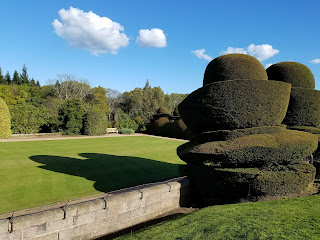 The enormous topiary yew hedges in the Crathes gardens were planted centuries ago. These in the photo to the left may be ones planted about 1700; others were planted in the 19th century.

From a certain angle, I can almost see the Red Queen from Alice in Wonderland...

Later that day, we participated in a large, happy ceilidh in an old village hall nearby. Lots of great music, stories, poems, songs, a wild and woolly ceilidh dance for our visitors from the BFE conference...and some excellent step dance (Pat Ballantyne) and piping (Iain Richardson): 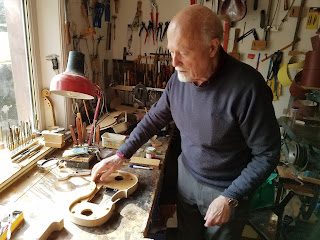 April was also a month for visiting several violin makers in Aberdeenshire. One gentleman I visited, David Vernon, lives south of Aberdeen in Angus, where he has a small shop at his home.

He, his violins, home, and shop are all quite interesting, and I was able to interview him to find out something about his story. The sitting room, which used to be a library and small concert venue for the community, could easily be a museum--fascinating objects are tucked away everywhere. Before I left, David pointed me towards an intriguing object that had been hand-carved for him (see video).

So, enough for now...more in a bit when I have had a chance to restore my room and my desk to some order after the blizzards of reading and writing this term. Till next time! In the meantime, enjoy some of the signage I found in my recent travels!

Cheers, and thanks to all of you,
Mara 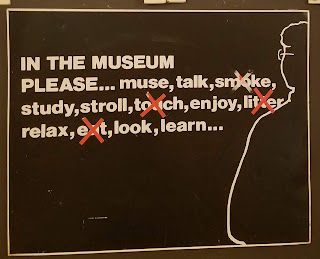 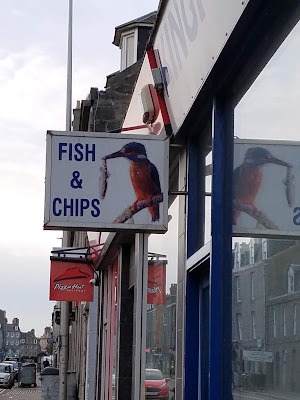 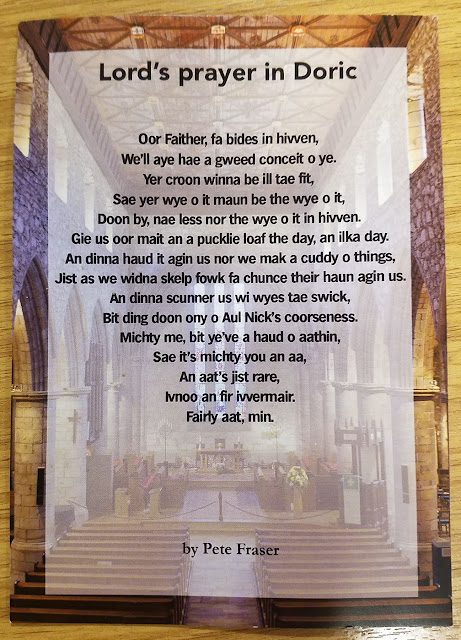 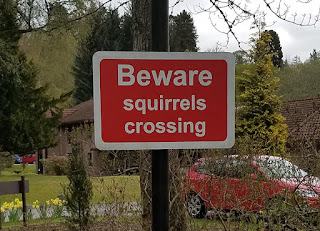 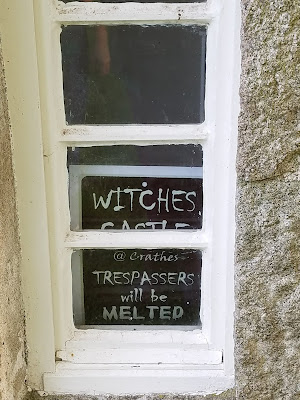 And on that note....Happy Spring, everyone! 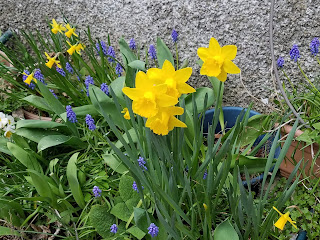