Meanwhile, back at the Elphinstone Institute... 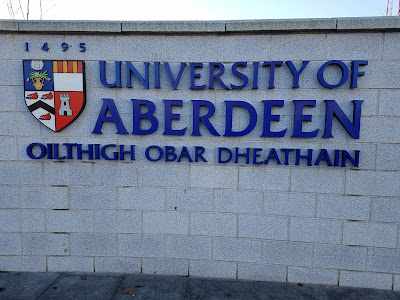 It might look like we're gallivanting all over Scotland in this program. Well, it's true that we have a lot of adventures at the Elphinstone, and we do some travelling. We'll be on another five-day long field school next week, southward to the Scottish Borders (stay tuned!). But there are some lovely things at home in the Institute, housed in the MacRobert Building, like the Buchan Library, where we often have classes. Then there's the beautiful Bosendorfer piano in the lecture hall...and fortunately, one of my classmates, Eleanor, is a good pianist!


She did mention that those five extra keys at the bottom (yes, it's a monster piano) are a bit disconcerting spatially, but it doesn't seem to bother her at all.

January 25 was the birthday of Robert Burns (Scotland's Bard), and Burns Night celebrations are plentiful from about mid-January to early February. The Elphinstone Institute and the Scottish Culture & Traditions organization joined forces to make our own Burns Night Supper a success. We all participated, from preparing carrots, leeks, potatoes, and swedes to make some excellent soup and the requisite neeps and tatties, to providing a variety of music for the occasion! Here's a short musical video taken by friends sitting way at the back of the venue, Dunbar Street Hall, so you'll have an opportunity to see some of us serving the haggis and neeps and tatties during the musical entertainment:


More musical entertainment links are at the end of this blog chapter, from our trip to Fettercairn, where several of us travelled to celebrate one last Robert Burns supper this weekend. Burns Nights are a really nice way to light up the cold and dark winter season.

And about this much-discussed phenomenon of very short winter days (it's real!--I bought another lamp for my room to brighten things up):

February 1, 2019...it's St. Brigid's Day today, and also the Celtic Imbolc, or transition from winter to spring. It coincides with Groundhog Day in the States, but I'm not sure there's a solid connection with that ritual! In Aberdeen, the days are beginning to be a bit longer now, and it's staying light until after 4:15 pm. It's amazing what a difference an hour or so more daylight makes; a month ago, the sun was setting at about 3:20 pm. By July, the opposite will be happening--we'll have just a few hours of darkness, but that's hard to believe right now. 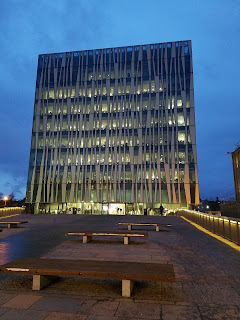 And the view from the window of my flat overlooking King Street at 4:30 pm the previous day (that's the moon rising, by the way): 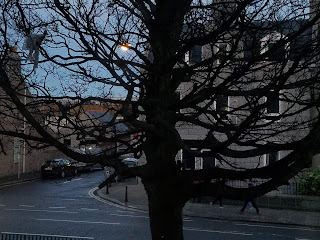 On January 21, the light would be roughly about the same at 8:30 am, tempting one to sleep in.

A week later, however, at 8:30 a.m., it's much brighter, and snowier! Along with the longer days, we now have a little bit of winter here. 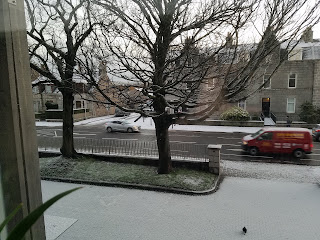 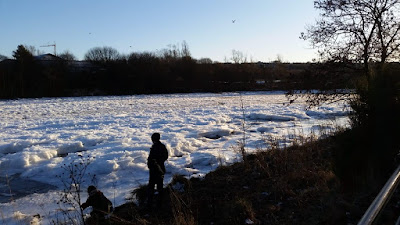 February 2:  The temps have been dropping and staying down there. The River Dee is frozen over in places. My friend Anne Taylor sent me this lovely photograph of the frozen river as they were out for a walk yesterday.

February 2 was also our final Burns Night supper celebration for the year, this one in Fettercairn, Aberdeenshire, about 45 minutes' drive from Aberdeen. The party was in a beautiful old stone barn (or steading), and the night was cold, but our host, who is also one of our classmates, had heaters blasting and great food and drink to keep the company warm. 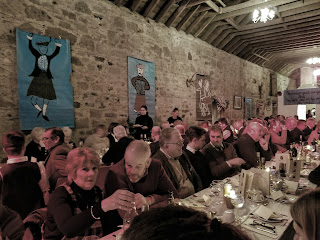 More music, more Robert Burns readings, more haggis (vegetarian and regular), neeps and tatties, and an international flavor all added up to make a warm and spirited evening. (The Fettercairn Distillery is just down the road, and they helped sponsor the event, so there was some of that, too...) Some of the Old Fettercairn whisky got up-ended into the haggis as it was being addressed, causing some hilarity, but I'm sure the haggis was none the worse for it!

Even the napkins were delightful (below). 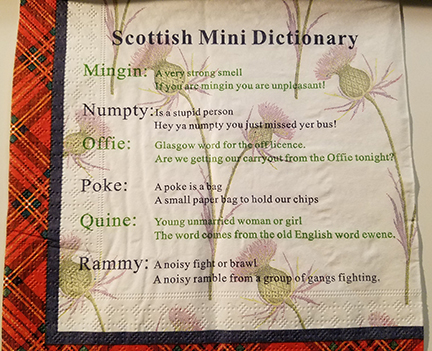 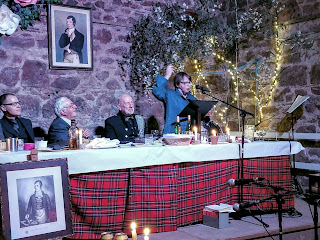 Right: Frieda Morrison (Scots Radio) as she gave the company a delightfully witty and heartfelt Reply to the Toast to the Lassies...

Our classmates at the supper represented some diverse places--North Carolina, Michigan, England, Scotland, and China. One of our classmates from Sichuan, China, plays a lovely instrument rarely seen in these parts, a pipa. As Wen-qiu Chen describes it to everyone who asks, it's basically a Chinese lute. It never fails to intrigue people who hear her play!

Eleanor Telfer and I performed a couple of fiddle and banjo medleys--Scottish and American--that we've worked on. Burns was well-represented with Green Grow the Rashes and Brose and Butter. This video snippet is the tail end of the American set we did, a version of Hangman's Reel.

As we rode back in the rented van provided by Jim, our kind host and fellow classmate, the night was beautifully clear and cold. In rural Aberdeenshire, you can see the Milky Way without any trouble. I'm still hoping to see the northern lights, but they were not to be seen last night.

February 3: This morning brought more snow! Because it is close to the sea, Aberdeen doesn't have the amount of snow that falls just 30 miles west of us, in the mountains. No closed secondary roads here, as far as I know! We do have fun on snowy days, even if we don't have more than 3-4 inches of snow on the ground. Wen-qiu sent us a picture of a wee snowman she made this afternoon: 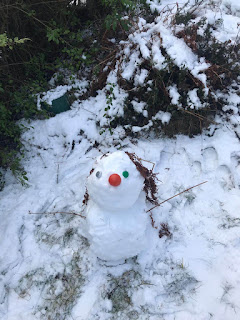 More later, after we return from our Trip to the Borders, where we will discover more traditions that are new to us!

Until soon--and thanks again, to all of you!