Into the home stretch...just a few months to go!

Exams are over, friends and family have come to visit, I have spent some time exploring in London, attended a folklore conference in Hertfordshire, and after coming home and replenishing my sleep supply, I'm feeling slightly more organised. I've had a few days of doing very little academic work (I needed a short break, and I very much needed to catch up on laundry and house cleaning), and now it's time to settle into a new routine of pulling the threads of all my research together and weaving something from it.

One of the things that we were required to do this past term was to make a short film about something related to ethnology or tradition in Scotland. We split up into three teams of two people each. After batting some ideas around for potential topics, my film partner and I decided to do something on a local fiddle maker and repairer, Ian Greig, who lives in Banchory, about 45 minutes' drive from Aberdeen.

Several people have asked if I would share the film, so with some trepidation, I will! Be merciful. ;)
It's too large to put in this blog, as it's about 9 minutes long, so here is a link to it, if you're interested:
https://drive.google.com/open?id=1XORBspOtTh8HaG3xq6i0maIkVzDsChZs

Since my last post, I've been to a lovely place not too far from Glasgow, called Cumbrae. It's a small island in the Firth of Clyde.
The only way out to it is by ferry, which stays busy--it's a popular place to enjoy some beautiful scenery. Our host, Jimmie Hill, took us on some trips around the island to enjoy its history and landscape (thank you, Jimmie!). This short video is a 360-degree view from the top of Cumbrae. (It's windy there, by the way.)


And a grand way to enjoy some of that scenery and beautiful weather, we discovered, was to rent a unique contraption called a conference bicycle (tricycle?) and dodge traffic on the front street along the harbour. It takes teamwork (seven people pedalling, with one steering), and it's a lot of fun. Here's a bit of live action:

Potholes and unprotected edges along the harbour wall are to be avoided at all costs.... 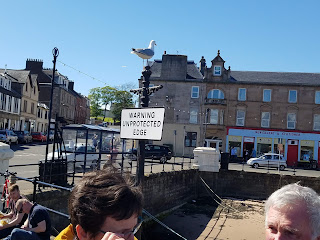 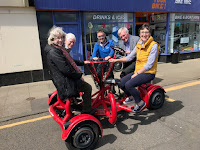 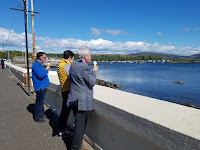 It's a bit tricky taking photos while propelling a conference bicycle! When our hour was up and we'd had fun dodging buses and cars (we missed hitting the police car!) and had some other adventures involving driving through a classic car rally, it was time for ice cream.

Cumbrae is a beautiful spot to visit, and it has had its share of visitors over the past millenium or so. Vikings were a powerful force in the western isles from about 800 AD, frequently raiding from across the North Sea. In 1263, not far from today's ferry mooring, King Håkon IV of Norway and his forces were defeated and driven out of Cumbrae. It was the last time a Norwegian king would mount a military assault on Scotland. For a bit more information on Cumbrae:
https://www.undiscoveredscotland.co.uk/cumbrae/greatcumbrae/index.html

Back in Aberdeenshire, puffin nesting season is here, and I am on a quest to see some puffins. When friends from North Carolina visited a few weeks ago, we went up to several beautiful spots north of Aberdeen on the east coast. We saw splendid seascapes and rocky coastlines, but no puffins! We saw thousands of other birds, though, as we walked carefully along the tops of steep cliffs near Cruden Bay and saw the amazing Bullers of Buchan, mountains of rocks along the coast that have been carved out by the sea over time: 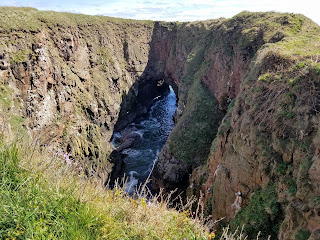 The waves have created several dramatic arches like this one along the North Sea coast, as they eat their way through the ancient rock. There are nesting seabirds everywhere--cormorants, kittiwakes, razorbills, auks, guillemots--but no puffins that day. Another time...

The Bullers are impressive. Narrow, deep paths trace the contours of the sea coast cliffs. You need to watch where your feet go. An occasional rocky beach comes into view. It's hard to see the scale of these cliffs, but you can get an idea if you see two very small humans climbing down to the large boulders on the beach... 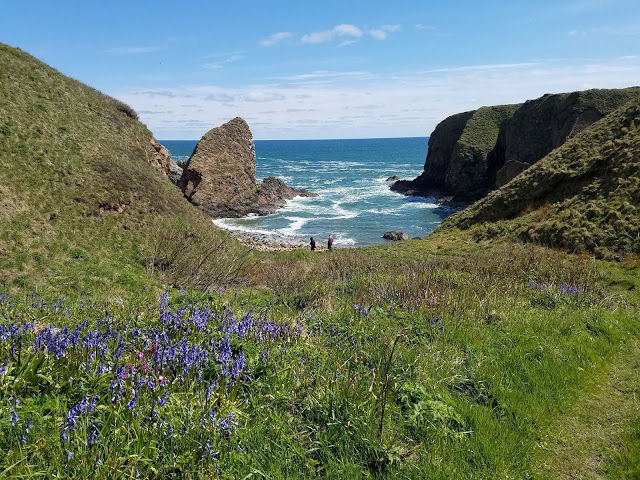 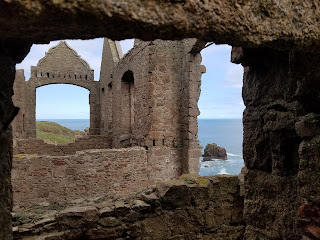 Not far from the Bullers of Buchan, the ruins of Slains Castle perch on top of the cliffs. There are two Slains Castles, one old and one new. (Actually three, if you count a pub called that in Aberdeen.) This one with the bay windows overlooking a seascape is the New Slains. It has had layers of fortress / house / castle / built onto it since around 1597, when it was built onto an older tower house by the Earl of Errol. It was added onto in 1664, and again in 1836. Bram Stoker is said to have stayed here in the late 19th century, and it may have been the inspiration for his 1897 novel, Count Dracula. (I believe it.) Samuel Johnson and James Boswell did indeed stay here, and there is a delightful account of their visits to both Slains Castle and to the Bullers of Buchan. Boswell points out that Bullers is probably derived from the English word boiler, and that makes a great deal of sense, as you watch the roiling waves smash their way into the spaces and crevices in the rocky coastline. 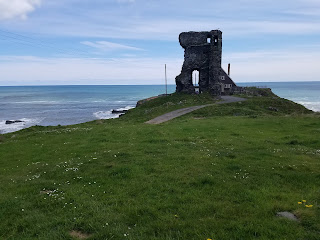 The older Slains Castle, by the way, is a hulking 12th-century ruin about 5 miles farther down the coast. It also belonged to the Earl of Errol (he who built the new Slains), who made the mistake of being part of a plot against King James VI in 1594. The King reacted by blowing up the Earl's fortress and exiling him for three years.

There is not much left of the castle today, but it makes a lovely garden feature for the small house that stands beside it. Sheep wander through it now and then. 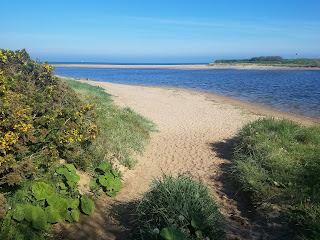 Of course, Aberdeen has its own seacoast, not so rocky and dramatic, but quite nice on a sunny afternoon--if you're lucky you might see dolphins and seals. The afternoons and evenings are, of course, lasting much longer these days--sunset isn't until about 10 pm, and sunrise is just after 4 am. It starts getting light about 3:30 am, and doesn't get very dark until about 11 pm. Plenty of time to spend looking at interesting things in the evening! The photo below is from the harbour in Aberdeen, looking at the lighthouse and a departing supply ship heading to the rigs offshore. This was taken about 9:45 pm in the middle of May. 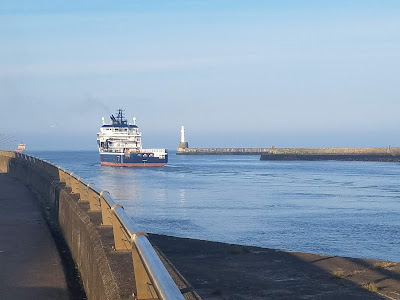 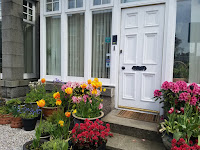 John came to visit in mid-May, and I think he might have enjoyed Aberdeen. We stayed at Brentwood Villa guest house across from the University, with a delightful host named Mary who loves to cook. She's not even afraid of vegan diets! (I definitely recommend this place if you would like a homey place to stay.) 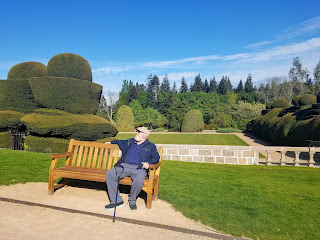 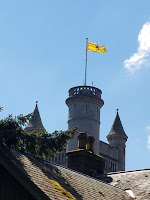 We were busy while John was here! We saw Crathes Castle, Balmoral Castle (the Land Rover trip through the lands around the castle is a great thing to do), various restaurants, the University, St. Machar's Cathedral, and visited several friends who live near Aberdeen.

From Aberdeen, we took the train to London and Heathrow, which is a nice way to see a lot of countryside in one day without working at it. From there, we headed to Hamburg to meet a good friend. Lots of walking, and lots to see, and a wonderful few days. That Hamburg - Frankfurt journey could be a whole new blog chapter, so I might wait for another time for that one!

I had a conference near London to attend after John went back to the States, so I took a bit of time to explore and see some of central London and the south bank. It's ridiculously easy to keep walking (just to see one more thing!), and then realise that the reason your feet are complaining is that you've actually walked about 13 miles that day! 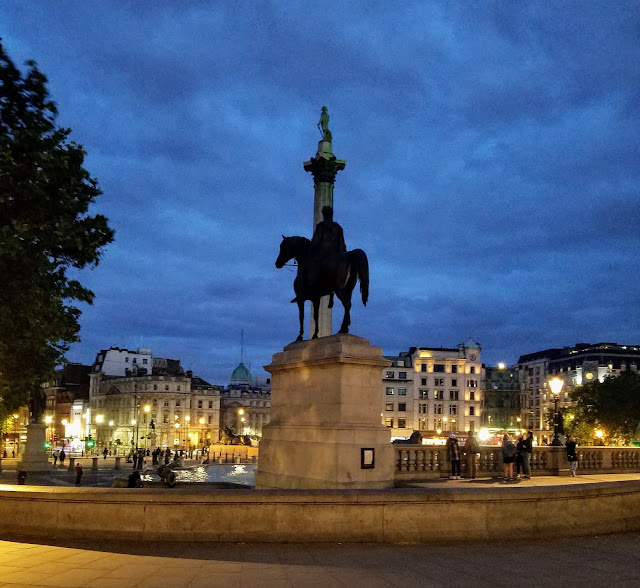 I ended that 13-mile day with a peaceful two hours in the church of St. Martin-in-the-Fields, listening to a concert by the Trafalgar Sinfonia of Vivaldi's Four Seasons, along with pieces by Bach, Purcell, Corelli, and Warlock. The night sky when I walked back to my tiny hotel room at 10:00 pm was a deep luminous blue, not quite dark yet.

So the next day I and my feet were very happy to sit in the Vaughan Williams Memorial Library at Cecil Sharp House (home of the English Folk Dance and Song Society) and be surrounded by dozens of English fiddlers' 18th- and 19th-century tune book manuscripts. What a great way to spend a day!

Now, home in Aberdeen again, I'm settling back into a routine of reading and writing, as I head into the last few months of my stay here. The dissertation is due by the end of August, and I fly back to North Carolina on 4 September! I will keep you posted on progress...wish me luck!