The 'ploughman poet' of Scotland is celebrated all over the world in a month or so of Burns Suppers, with variations on the same program that includes bagpipes 'piping in the haggis' as it is carried proudly into the dining hall, the Selkirk Grace said before eating, the famous address to the haggis, a toast to the 'immortal memory' of Robert Burns himself, a toast to the lassies and of course, the 'reply', and music, whisky, dancing, and readings from Burns' works. (The National Library of Scotland posted a link to a short 1953 film of Burns' Tam o' Shanter--worth watching!) The Burns Night tradition began not long after Burns died in 1796. It is a wonderful and companionable way to celebrate in the midst of a dreary time of year.

I found an interesting and well-written guide to having your own Burns Supper event here. Lots of interesting tidbits--about Burns, traditions, the lovely Selkirk Grace:

The Selkirk Grace was around long before Burns. But he is said to have recited the blessing at a dinner given by the Earl of Selkirk, hence its name.

This January has been the usual kind of midwinter chilly month, a time of waiting – for a bit of warmer sun to encourage bulbs to spring forth; for a newer, kinder leadership; for a chance to draw a deeper breath and feel that things will be all right. 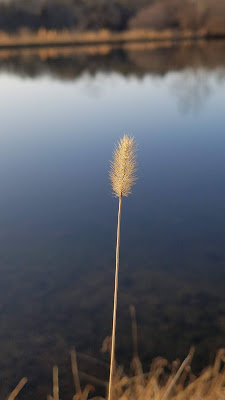 Since last Spring, as the reality of the pandemic settled into our consciousness, I have been taking photographs each day of things I find that bring me joy--flowers, birds, clouds, sunrises, sunsets. I post them on Instagram and Facebook to offset some of the rampant negativity.
As we wend our way through winter, I feel like I am having trouble finding 'interesting' pictures to share. No spectacular flowers yet. None of the usual 'wow' pictures that pretty much stage themselves. I have to look a little closer, a little more microscopically to see patterns and beauty. It's a good exercise for me--finding something remarkable and beautiful every day and sharing it.
So here are a few of my recent finds. Nothing earth-shaking or worthy of publication, just glimpses of a bit of the world as I see it. 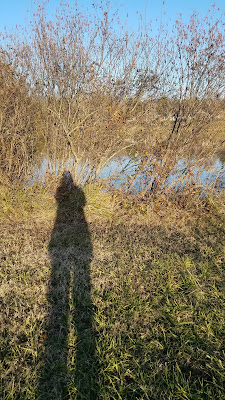 I love late afternoon light - the 'golden hour'. Edges of things become sharper, more dramatic. What I sometimes fail to see at noontime pops out and is suddenly rather magical. (And as my eyesight isn't getting better, this is all the more fun. Cataract surgery is in my near future...)

Sometimes I don't have my camera in my pocket, and almost inevitably that is when something really interesting appears. Then I must rely on words to relay that story.

I was sitting on a garden bench last week in an almost-warm afternoon, and heard a familiar bird song. Bluebirds? I hadn't seen a one since September. But there was more than one, a lot more. I looked up to see a beech tree, still clad with its crispy brown leaves, inhabited by at least 15 bluebirds having a conversation amongst themselves, not in the least disturbed by this lowly human watching them. Bright flashes of blue amongst the beech leaves...it was lovely. Turns out one of my neighbors has a feeder that they use as a communal hangout nearby. They are all around her front porch!

And then there are the more down-to-earth denizens...bright ornamental kale! 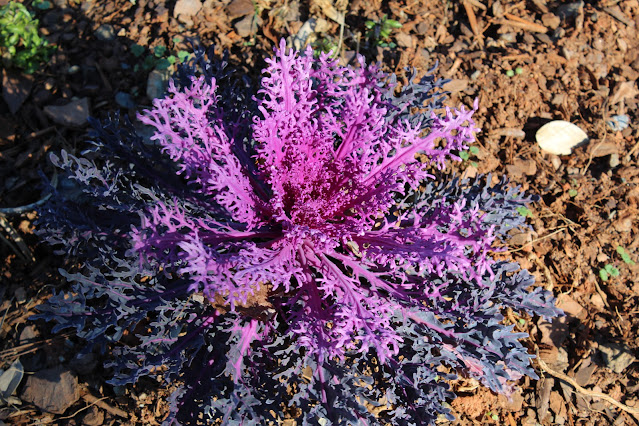 There are always interesting patterns to see, as in the winged elm trees and reflections in the small lakes I often walk beside... 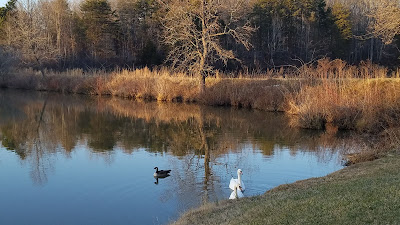 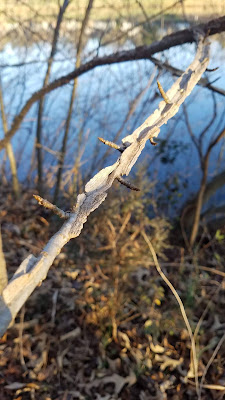 Paths along the lakes and ponds are well cleared, but not manicured. 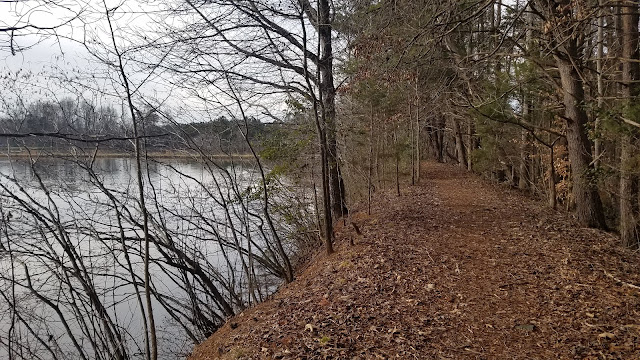 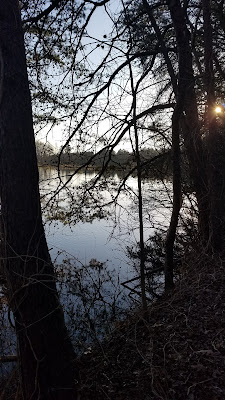 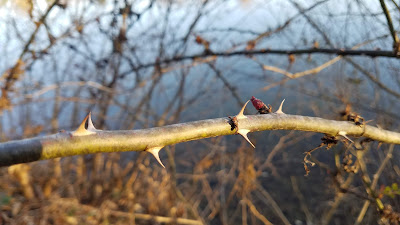 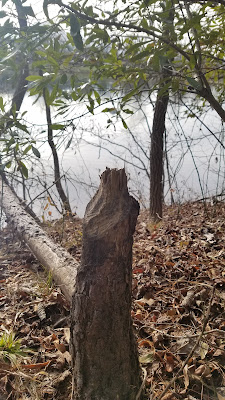 Until a year or two ago, there were several beavers who enjoyed pruning the smallish trees along the edge of the water. Sadly, the beavers needed to be relocated to a place where it didn't matter if they caused a little ponding and flooding in folks' back yards. But evidence of the beavers' work still remains... 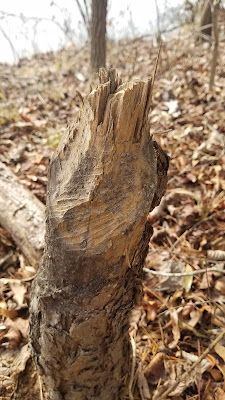 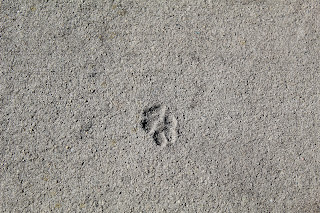 If I think to look down at my feet as I walk (the saying 'dig where you stand' comes to mind) I might notice other, more mundane evidence of animal life preserved in a sidewalk...
And when I'm back home, not walking and looking for bits of beauty outside, I'm continuing the unusual luxury of reading. 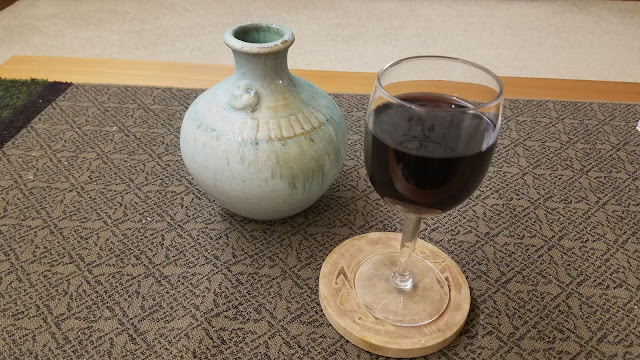 Last night, I finished reading Nan Shepherd's little gem of a book, The Living Mountain. It bears a second (and third, and fourth, etc.) reading.
I'd heard about Nan Shepherd when I was living in Aberdeen (she taught English literature at Aberdeen University until she retired in 1956), but I never took the time to read her novels, or this little book, which I just discovered a few weeks ago. I thought it was a book about the Cairngorms, the mountains I drove around in a great deal while I was there, talking with people who lived in little towns at the foot of the mountains. So I was surprised to find that it is about the mountains, and yet not just about the mountains. It is more about the connectedness of people and nature, and how the natural world directly affects our own well-being. Nan Shepherd was a hill-walker, a visionary, and a startlingly good writer. Her prose is poetic, incisive, and visual.
I want to read The Living Mountain again; I missed so much this first time around. 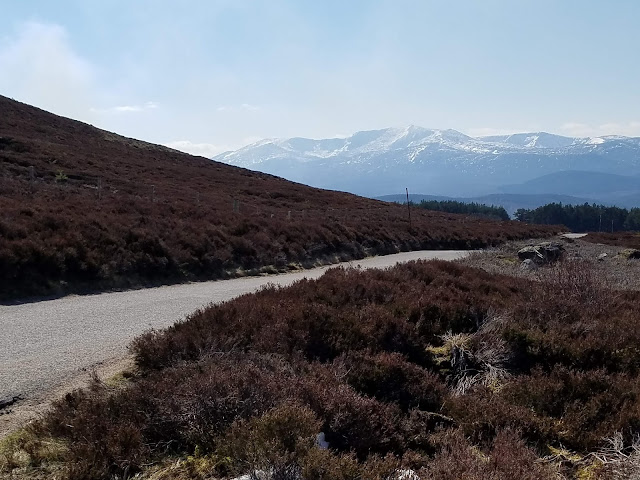 And so here it is, two days after the official Burns Night celebrations, two days later than I had intended to finish this entry. As Burns wrote, 'the best-laid schemes o' mice an' men gang aft agley'. (Burns Night celebrations are still ongoing, and will continue well into February!)
Today I will finish this latest rambling series of thoughts and send it out into the world to my friends. Be well, stay safe. And thank you for reading this with me.
All the best,
Mara
Posted by Mara Shea at 12:39 PM