The first week of a new year

We made it through the first week of 2021. Let's hope the next few weeks are less exciting and stressful.

For John and me, it's been a good week for just staying put and catching up on things, focusing on the world in a more positive way.

I've been reading, a rare activity for me in the old days when I was driving all over the eastern US for gigs. I have more time for reading now, and I want to use it. Margaret Fay Shaw's From the Alleghenies to the Hebrides is a lovely picture of her life as she grew up in Pennsylvania and moved to South Uist, in the Outer Hebrides of Scotland (by way of Philadelphia, New York City, Glasgow, and Paris). I found myself thinking as I read how lucky she was to appear on the scene as important things happened, the dream of every photographer and writer, I suppose. She captures glimpses of old traditions, songs, ways of life, skills, and reflects on them; she herself was part of them, too, as an observer and participant.

Now I am reading about the Stevenson lighthouses in Scotland, how Robert Louis Stevenson's grandfather, father, uncles, and various other relations were lighthouse designers and engineers. From 1811 through the late 1930s, they were responsible for designing many important lighthouses in the Orkney Islands, Shetland, Lindisfarne, the Hebrides, the Isle of Man, and numerous lighthouses along Scotland's coastal waters. I can see where Robert Louis Stevenson's novels might have found their backdrops...he had a lot of opportunity to visit many of these lighthouses, although he disappointed his father a bit by becoming a man of letters rather than an engineer. An interesting mix of history and reflection, The Lighthouse Stevensons by Bella Bathurst is opening my eyes to a lot more than just the beautiful scenery of Scotland.

Today, after a bit of snow decorated the shrubs overnight, I decided to catch up on a few things outside our new home, like cleaning out and refilling bird feeders, tidying up, and finding new homes for things stuffed unceremoniously into corners. One item I picked up was a quirky carved statue of St Francis that a friend gave to John years ago; it has hung outside of our house(s) for years, much beloved by animals. It looks like it, too...the squirrels long ago took a great liking to his face and hands. 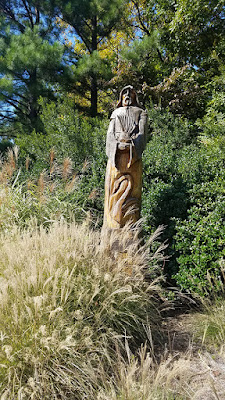 St Francis is an unofficial patron saint around here, as shown by a nearby large statue of him that some of the resident workmen carved from a dead tree; it graces the corner of our street in Twin Lakes. He still has his face and hands, unlike our much-beloved carving.
I desperately needed a way to secure the top of a bird seed canister, a supposedly rodent-proof galvanized container that sits outside the back door on the patio. More than once I have found not one, but two squirrels sitting inside the container, chowing down on the bird seed. They are smart creatures; lids and locking handles don't even slow them down. Perhaps St Francis could help out. I wedged our well-chewed statue under the handle. It fit beautifully, and seems to work pretty darn well. Now our new guardian of the bird seed can makes it impossible (I believe) for a squirrel to actually get a grip on the lid and pry it off.
Nevertheless, they persist... 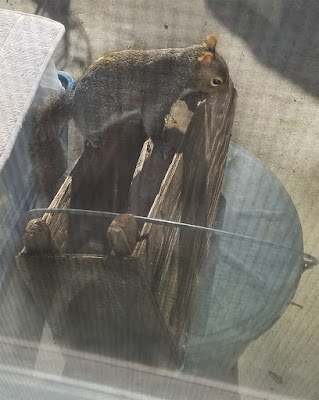 (Apologies for the screen blur in this picture taken through the window. Squirrels have great peripheral vision, are fast, and are very good at leaving in a hurry.) I took this picture about 20 minutes after St Francis began his new job as bird seed guardian.
There's probably a small council of squirrels meeting at this very moment, contemplating how to break into the bird seed can.
I know a lot of folks don't think much of squirrels. Glorified tree rats. Bandits. Sneaky thieves. My dad tried his best to thwart their efforts at emptying the bird feeders (as do I), and once or twice resorted to BB guns (I won't do that). But whatever you think about them, they're entertaining, acrobatic, and occasionally hilarious. I loved watching red squirrels in Scotland, and black squirrels I've seen in Maryland and in Toronto. 'Shadow-tails' are well-named! 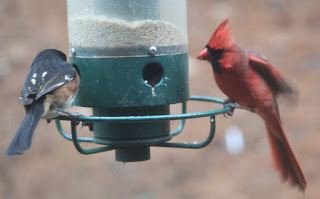 We do have a little wildlife hereabouts, although nothing particularly exotic (a good thing, I suppose). Bluebirds, mockingbirds, chickadees, Carolina wrens, cardinals, rufous-sided towhees, brown-headed nuthatches, red-tailed hawks, chipmunks, bats, and rabbits all abound, and I glimpsed a fox trotting through the grove of trees in back of our house the other day. The balance of nature...
Enough for this week! Not exciting stuff, but that might be a welcome contrast to what's in the news. One last thought: someone asked me the other day about studying in Scotland and what it was like. I was interviewed by Jamie McGeechan of The American Scottish Foundation in late 2020, and he asked me a lot of questions about that. Many of you reading this blog already know some of the experiences I had and how I came to be in Aberdeen and at the Elphinstone Institute for a year. The podcast with Jamie, however, focuses a little more on it, and I was happy to talk with him and to be a part of the ASF's exploration of topics about Scotland. (Some good marketing soul suggested that I post the podcast on my website home page, so I have done that. I'm not very good at marketing.)
Stay well, be peaceful. And thanks for reading this!
Cheers,
Mara
Posted by Mara Shea at 8:46 AM